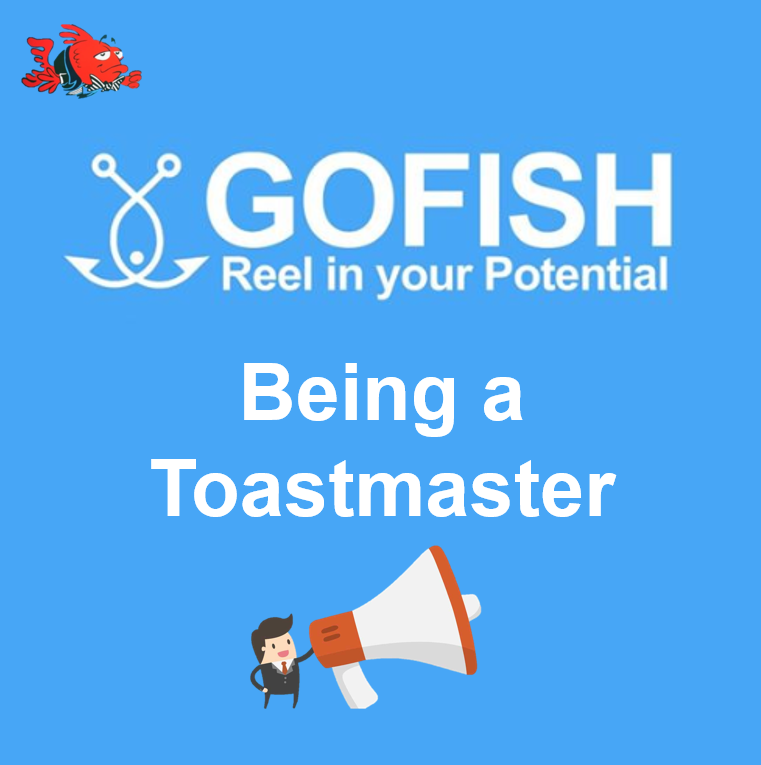 In these unprecedented times, it’s important to look on the bright side of things. We have been in touch with Ian who made us understand that there are many jobs people don’t even consider when searching for a new career path such as a Toastmaster. Ian has shared some information about his role as well as some of his experiences. Every job brings a lot of new skills and experiences- diversity of things you might have to undertake! Have a look at what Ian had to say:

My name is Ian Pugh, and if you have been to any of the Gofish presentation nights you will have seen me standing in the red tail coat officiating over the proceedings. But have you ever wondered if that is all Toastmasters do?

Toastmaster do not just make announcements. They are experts in procedure and etiquette for each and every occasion. My role is to control any function from start to finish. Be it a cocktail party, a business function, a Civic Event, a Show or one of the biggest days of your life, your Wedding. The Toastmaster is there to choreograph and then run the day through to its successful conclusion. Toastmasters are the “Go to” person as they stand there in their Red Tail Coat that was first worn by one of the great toastmasters of the late 19th and early 20th Century, William Knightsmith. It is a typically British tradition and will add a dignity and control to any event.

Well, that’s the advert taken care of, so let me tell you of an occasion when, despite my best efforts, things did not go exactly to plan.

Weddings are the most joyous events, but also the most emotional. One still has me wake in the middle of the night in a cold sweat. And it started two days before the big event. In one of the many meetings and telephone calls the bride will make with the Toastmaster she told that firstly they were providing a “free bar”. To any organiser this is not great news as many will drink more than they should. The most common results are rowdiness for a few and a general reluctance by the many to be moved for photos, cake cuttings, first dances etc. They just want to chill out. This is not a major problem for any skilled organiser so to be made aware was good warning. However, the second piece of information sent a shiver of fear down my spine.

The Brides mother and father had parted two weeks before!

I could say this was not the best news I had ever received, but I had hopes that they would remain dignified for their daughters sake, even though there was a free bar! Well come the big day, I arrived very early, as usual to welcome all of the guests, who started to arrive at about 1 O’clock. The first to arrive was the bride’s mother, elegantly dressed and unescorted. Ten minutes after the father of the bride arrived suited and booted, with his new girlfriend! To say the atmosphere was tense, would have been the understatement of the year. At 1.30 the Registrars arrived ready to interview the Bride and Groom. One hour later I was leading the Bridal Party into the wedding ceremony. 30 minutes later I opened the doors to

receive the latest married couple. The guests then filed out of the celebration room and, with an hour to go before the Wedding Breakfast, the newly married couple went to receive their guests. The bride first went to see her mother, and of course

there were hugs and tears of joy. The bride then moved to greet her father, who then hugged her with a kiss as any father would. She then moved to shake hands with his girlfriend, who leaned forward to greet her with a kiss on the cheek. The Bride was taken aback and moved just very slightly backwards causing the girlfriend to overstretch, when — “Splash” — some of her red wine was spilt over the pristine white bridal gown.

There came a moment of total silence in the room when all conversation stopped. Without hesitation, I took hold of the brides hand and marched her towards the ladies toilets, stopping momentarily to pick up a bottle of white wine and two glasses. Now to this day, I am still not sure why I picked up two glasses? Maybe out of habit as you are always presenting the married couple with glasses of wine for toasts and cake cutting etc. etc. We then marched into the toilets and I told her to go into one of the cubicles, remove the dress and pass it out to me. I hadn’t quite worked out how she was going to remove the dress on her own, but that was the least of my problems. Fortunately, at this moment one of the bridesmaids arrived and assisted. She passed the dress to me and I held the stained area over one of the wash basins and poured about half a bottle of white wine over the mark. I the rinsed it through with cold water until only the slightest shadow of the accident remained. It was then dried over a hot air hand dryer and passed back to the waiting bridesmaid. When the bride came out you could see that the stain was now hidden in one of the folds of the dress. If you hadn’t known it was there you would never have seen it. When the bride left the room to be welcomed back by her guests, I realised that I still had half a bottle of wine and two glasses, so I filled them both and passed one to the bridesmaid and we both simultaneously breathed a sigh of relief. It was at this point that she posed this question to me,

“What would you have done had it not been me entering the toilet but the bridegroom, only to find his new wife already stripped out of her wedding dress down to her underwear while you stood there with a bottle of white wine and two glasses?”

I still have nightmares over that!